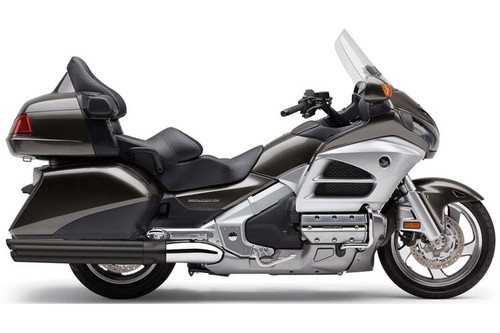 Emphasizing the six cylinders that power the classic Gold Wing engine, our six-into-two-into-six slip-on mufflers for the F6B and Gold Wing, each have three separate bodies on each side giving the bike six pipes total.

Each of the three pipes on each muffler ties into a three-into-one collector that in itself is a marvel of engineering and production.

That gigantic, clover-leaf shaped collector locks each tube into the perfect position, and a system of unseen brackets ties the pipes together at the rear.

Cobra designed this system so that each pipe's arced bend matches that of the bike's bags, creating perfect visual symmetry.

The ends also feature a radical slash cut giving them an even sportier look.

If you can imagine the muscular growl of a high-performance Porsche at full throttle, you have the tone these mufflers produce.

While louder than stock, they are still well within acceptable sound levels.

And the tonal quality now matches the performance of the bike itself.