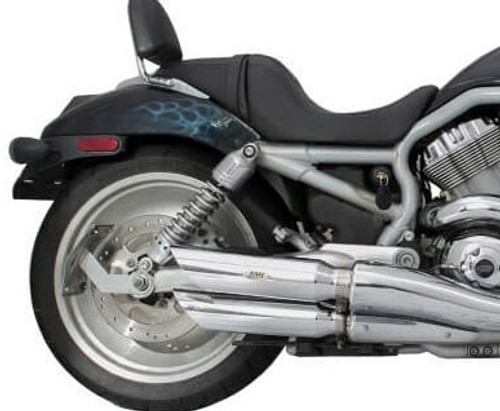 Type a description for this product here...

These pipes have a great deep, throaty tone that are much louder than the stock exhaust but not as loud as the non-baffled version. As far as volume goes, we rate them a 6-7 on a 1-10 scale. These pipes are as awesome looking as they are sounding, always generating compliments! Both the top and bottom pipe are approximately 16 giving your V-ROD that aggressive look. TAB Performance pipes are designed to be easily installed by yourself and can put on and ready to go in about 15 minutes - including taking off your factory pipes using only a few simple tools. TAB pipes require no additional hardware for installation and use your factory pipe clamps.

As with any exhaust changes that you make to your bike there will be a difference in back pressure which requires an air/fuel mixture correction to ensure the peak performance of your engine and prevent possible damage. TAB Performance offers several solutions including our Auto Tuner and Fuel Manager. TAB Performance is not responsible nor held liable for any damage caused to the motorcycle due to not making proper fuel system changes.

Exhaust clamps pictured are Harley-Davidson aftermarket part number: 65271-03 and are NOT included with the exhaust.