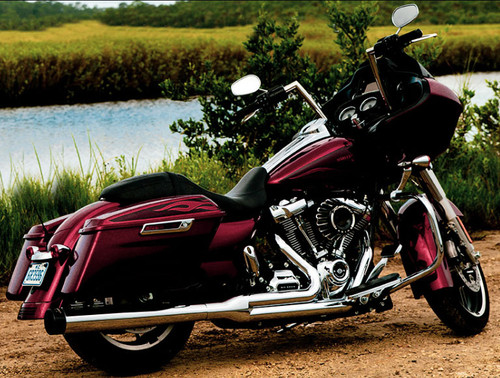 Boost your low, mid, and high end torque and horsepower while also giving your bike a classic, sleek look and the Rinehart sound that they're known for.

Big Power! The stepped header 2-into-1 system provides the rider with powerful low-end torque that does not sacrifice maximum top-end horsepower.

The system utilizes stepped header technology that scavenges the exhaust efficiently. Scavenging draws the exhaust out of the cylinders allowing the engine to operate at peak performance making the most horsepower.

Rinehart's half megaphone 4 inch muffler and proprietary baffle design give this system a deep, warm tone that’s mellow at low RPM and idle, but really comes to life with a twist of the throttle!

2-into-1 muffler can be accessorized with 4 inch Moto Series end caps.