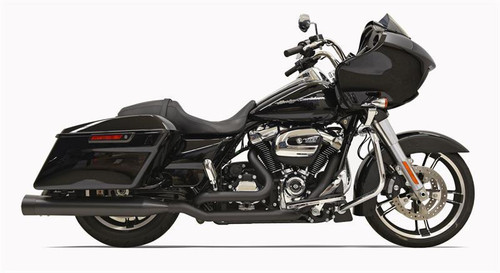 When you are looking to install "out of the box" performance, look no farther than our Complete Stage 1 Power Packages. Immediate improvements in sound, horsepower and torque. Additional benefits include a richer fuel mixture for a cooler running engine, plus the headers run hundreds of degrees cooler with the absence of a catalytic converter.

#1801-0769: Bassani DNT Slip On. If you're looking for a slip on that's controllable, this is your best bet. They are nasty when you crank the throttle, but when you're just cruising along you can hear your radio without a problem. $649.95

#66005: Vance & Hines Fuelpak. This little tuner is an unstoppable force. It handles any combination of exhaust with ease and comes in at a price that's impossible to beat. that's why we hand picked it for this package. $399.99

#18-458: Arlen Ness Big Sucker Stage 1 Air Filter Kits for Harley Davidson Touring Models with the Chrome Backing Plate not only delivers a ton of air but also features Ness's Hidden breather built into the backing plate so there's no hoses or hardware to see. $152.96